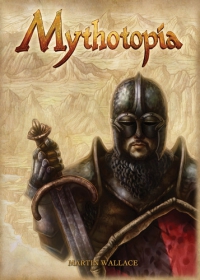 Sprawdź cenę
Opis wydawcy
„Mythotopia” is a deck-building game set in a medieval fantasy world that draws on the mechanisms found in „A Few Acres of Snow” with players customizing their personal card decks by drafting cards and expanding into provinces.
The game board is comprised of forty provinces, each with its own card. At the start of play, you receive a number of Province cards at random, then mark your initial positions with town pieces. Shuffle these Province cards with a set of five Initial cards to form your starting deck, then draw a hand of five cards. The game includes 27 Improvement cards, 16 of which are drawn and placed on display; these cards will be drafted during the game.
„Mythotopia” has nine variable victory point (VP) cards, four of which are drawn at random for a game; place these cards on display with three fixed VP cards, then place a number of VP counters on each card. The fixed VP cards give points for building cities, roads and castles, while the variable ones may change the board situation by adding dragons, runestones and citadels. Alternatively they may grant VPs for controlling a certain number of sea areas, for successfully attacking other players, and for building cities/roads. As these VP cards vary from game to game, they alter the balance between developmental and aggressive play.
Utwory powiązane
Gry (22)

‹A Study in Emerald› – Martin Wallace